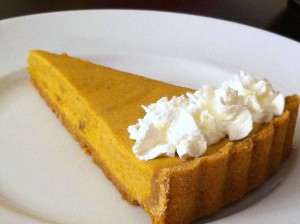 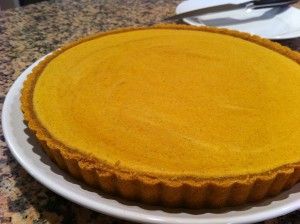 Preheat the oven to 350 degrees F and position the rack to the middle position. Line a sheet pan with parchment paper and set aside.

To prepare the crust add the graham cracker crumbs, sugar, cinnamon, and melted butter in a medium bowl and mix until the crumbs and ingredients are fully incorporated and moistened. Press the crust mixture into an 11-inch tart pan with a removable bottom and press evenly into the sides and bottom making sure the mixture has been firmly pressed into the tart pan. Place the tart on the sheet pan lined with parchment paper and bake for 10 minutes and then cool to room temperature.

In a small bowl dissolve the gelatin in ¼ of a cup of cold water. Once the gelatin has set; about 5 minutes add the mashed banana and orange zest to the dissolved gelatin and set aside.

Next prepare the filling. In a small bowl, whisk the egg yolks and set side. Using a double boiler, heat the half-and-half, pumpkin puree, brown sugar, salt, cinnamon, and nutmeg for 5 minutes. Pour a small amount of the hot pumpkin mixture into the egg mixture while whisking constantly to temper the egg yolks and then once the eggs are tempered add the egg-pumpkin mixture back into the pumpkin mixture and whisk really well to incorporate. Continue to heat the egg pumpkin mixture over the double boiler for another 3 to 5 minutes and the mixture will slightly thicken. It is important to stir constantly or the eggs will scramble-yuck! Remove the mixture from the heat after 5 minutes. Add the mixture with the gelatin, banana and orange zest mixture into the pumpkin-egg mixture and whisk until smooth and incorporated.

Chill in the refrigerator for at least 2 hours but preferably overnight. Decorate the tart just before serving. In the bowl of a stand mixer using the whisk attachment, whip the heavy cream for 30 seconds then add the sugar. Continue to whisk until firm peaks are formed. Using a piping bag, pipe the whipped cream on the tart and sprinkle with freshly grated orange zest and serve cold.