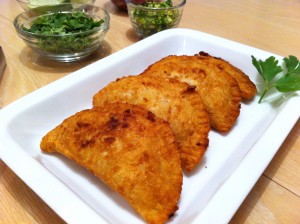 For the Empanada Dough: 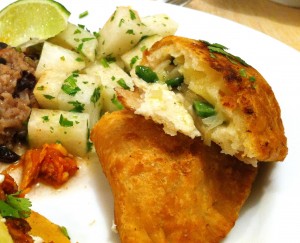 First prepare the empanada dough. In a food processor fitted with the steel blade process only 1 cup of flour and all the mesa harina, sugar and salt until just combined. Next add the partially frozen butter and pulse until the butter is cut into really small bits; about 10, 1 second pulses. Now add the remaining 2 cups of flour to the processor put the lid back on and with the processor running, quickly add all the chilled vodka and just enough of the ice water until the dough just forms a mass then stop the machine to not overwork the dough and dump it onto a floured work surface. Gently form the dough into a ball and wrap in plastic wrap and set in the refrigerator for 1 hour to rest.

Meanwhile, prepare the filling. The poblano chilies need to be roasted first. Set the oven to broil and place the poblanos on a baking sheet and rub 1 tsp of vegetable oil on the skins. Broil the chilies for 5 to 10 minutes until the skins are black and blistered. Remove from the broiler, peel off and discard the charred skin and slice, removed the seeds and then dice the roasted peppers and set aside. In a sauté pan add 1 Tbs of olive oil and the sliced onions and cook the onions with the oregano and cumin and sauté until the onions are golden brown. Then add the minced garlic and diced peppers and sauté for 1 minute, season with kosher salt and set the mixture aside to cool. Once cooled, add the shredded cheese to the mixture and gently incorporate the cheese into the mixture evenly.

To assemble the empanadas, remove the dough from the fridge, flour a work surface and cut the dough in half, then cut each half into 3 even pieces so there are 6 even pieces. Roll the first piece out enough to cut 2 six inch disks and set on parchment paper and repeat with the remaining pieces of dough.

You will have 12, six inch disks when you are finished. Next fill each disk, trying to staying on one side of the circle with 2 Tbs of the onion/pepper/cheese filling. Now add 3 Tbs of water to a small dish and using a pastry brush or your finger use a little water to go around the perimeter of each circle with the water to act like a glue and close the dough around the filling to make a half circle.

‘Press the edges tightly and then either crimp the edges with a twisting pattern or use the back side or a fork. Repeat with all 12. Place the filled empanadas back in the fridge to cool the dough while preparing to fry.

Using a Dutch oven, pour enough oil to fill the bottom with 3/4-1 inch of oil and then attach a candy thermometer and heat the oil to 360 degrees F. Working in batches, add the filled empanadas a few at a time making sure they don’t touch, keep the oil at a constant 350 degrees F and fry 1-2 minutes per side. Be careful, the oil is very hot when adding, turning and removing the empanadas. Remove the empanadas a little before the color turns golden as they will darken when they are removed from the oil. Place them on a dish lined with paper towel to absorb excess oil and continue until all the empanadas have been fried. Serve immediately and with a little sour cream topped with cilantro if desired.