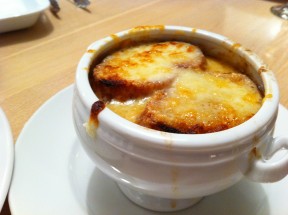 Preheat the oven to 400 degrees F and place the rack to the middle-lower position.

First spay the interior and all the side walls of an enameled Dutch oven with non-stick cooking spay. Place 3 tablespoons of unsalted butter in the Dutch oven along with all of the thin sliced onions. Sprinkle 1 tsp of kosher salt over the onions and place the cover on and set in the oven for 1 hour. After one hour, stir the onions and scrape any onions from the sides and bottom, place the cover back on but just off center a bit to allow air to escape. Place the pot back into the oven for another 1 hour and 45 minutes more. 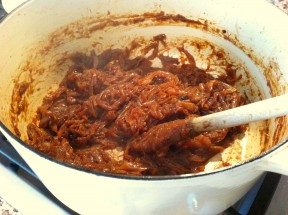 After the 1 hour 45 minutes has passed, carefully remove lid from the pot and remove Dutch oven from the oven and set on the stove top over medium to medium high heat. Leave the oven on at 400 degrees F. Use a wooden spoon to scrape and onions that have stuck to the bottom and sides of the Dutch oven. Continue to cook for 20 minutes until the all the liquid that was in the Dutch oven has evaporated. The next step is important to develop flavors. Allow all the liquid to evaporate and wait for the onions to caramelize on the bottom of the pot until a crust forms but not burns. Once a caramelized crust forms add ¼ cup of water to deglaze, then scrape the crust off with the wooden spoon and repeat the same process 3 times. Each time the onions will darken in color until they are very dark, then add the sherry and cook stirring occasionally until all the sherry has evaporated. Next add the chicken stock, beef broth and 2 cups of water to the pot. Stir to incorporate and bring to a boil. Meanwhile place the thyme and bay leaf in some cheesecloth tied close and drop in the pot. Once the liquid is boiling reduce the heat to a simmer, cover and simmer for 30 minutes.

After 30 minutes remove the cover and discard the cheesecloth with the herbs and taste for seasonings. Add a little more salt to taste and 1/4 teaspoon pepper. 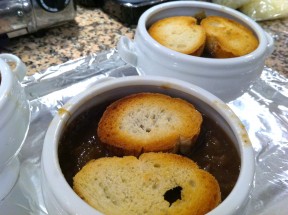 Meanwhile prepare the cheese croutons while the soup is simmering the last 20 minutes. First slice a French baguette on an angle 1/4-1/2 in thickness. Place the slices of baguette on a sheet pan in a single layer and bake for 8-10 minutes until golden brown and crisp. Remove them from the oven and leave the oven on. Position the rack in the oven so the oven proof soup bowls will be 6-8 inches from the broiler element. Turn on the broiler

Ladle the soup into the oven proof bowls and set on a sheet pan lined with foil. Set a crisped banquette slice or two afloat in each soup bowl and then sprinkle the crisp baguette slices with gruyere cheese. Move carefully the filled bowls to the broiler and broil until the cheese has melted and turns golden. Remove the bowls from the broiler and rest for 5 minutes and then serve. Caution: the bowls will be very hot!